To celebrate the launch of Amber’s new commissioning fund, which aims to support established and emerging documentary photographers, we are finding out more about the AmberSide living archive, exploring some of the commissioned stories found there. This week the focus is on ‘Farewell Squalor’ by Sally Ann Norman. 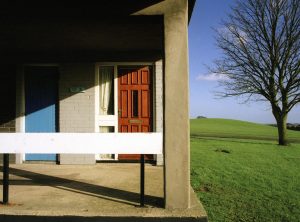 Sally Ann Norman’s work ‘Farewell Squalor’ documents the wave of demolitions between 2001 and 2003 in East Durham. The title comes from a 1946 report that stated the case for building the County Durham New Towns which led to the founding of Peterlee two years later. Norman is, first and foremost, an architectural photographer. So unlike many of the other images in the AmberSide archive, the majority of the photographs here, unsurprisingly, contain buildings rather than people. However that doesn’t mean there aren’t stories to be found here and it is hard to resist the pull of anthropomorphism or voyeurism when looking through this set, as we search the houses for small traces of personality. Norman’s eye is skilful while embracing the surreal. In one photo we a see a textured concrete wall, overcast with long shadows of elephant grass and to the left of the eye line, some Spanish onions hang on a pole. In another, the light streams in through patio doors and onto a vase of artificial sunflowers on the table, a dead flower basket hanging forlornly outside. In some of the photographs, we also see homes partially obscured by other trappings of domesticity: fences, ivy or in one case, through the tinted window of a caravan. All of these photographs demonstrate that Norman is like a magpie with a camera: particularly drawn to colour, shape and contrast: red walls meet yellow curtains meet blue doors. Yet this is no sprawling concrete suburbia. Peppered through this set, the viewer is shown where these houses sit, nestling among the hills and dales of County Durham. This is emphasised by the sharp camera angles too, as the steep gradient running left to right across the corners of the screen. Up close the housing seems dense however a long shot reveals they are quite isolated, caught between sea and pasture.

When we do encounter people, they are characters. A man sitting on a bench, walking stick askew, cuddling his terrier. A couple sit grinning, clearly house proud, in front of their well-tended roses and begonias. There is a closer portrait of a suburban cowboy complete with hat and double denim, leaning with both hands on his front gate posts denying us entry, the weeds pushing through the concrete below his feet. In another we see a group of children larking about, a boy’s face obscured by his bright red shirt over his head, his hands mischievously waving to the camera. Norman pulls the viewer in closer with these domestic vignettes, as we start to see what could be unfolding inside some the houses, away from the camera. These soft approaches make what comes later in the set even more unexpected. We see the demolition nibblers through wire fences. The homes that only a few moments ago we had imagined as domestic idylls are now reduced to piles of bricks and rubble. It makes us look closer again at some of those long shots. Sure enough those aren’t windows with their curtains drawn: they are covered in boards. A group of boys with their backs to the camera watch on as the JCBs move in, tearing down the outer walls. In a cloud of smoke, the houses and their gardens are gone. We didn’t even get to say farewell.

The original accompanying exhibition text by Graeme Rigby can be found here: https://www.amber-online.com/collections/farewell-squalor-text/

Become an AmberSide patron to help fund our future commissions to document the changing landscapes of the North East and beyond: https://www.amber-online.com/patrons-support/