To celebrate the launch of Amber’s new commissioning fund, which aims to support established and emerging documentary photographers, we are delving into parts of the AmberSide living archive, exploring some of the commissioned stories found there. This week the focus is on Amber’s 1987 commission ‘Seafarers’ by Mik Critchlow. 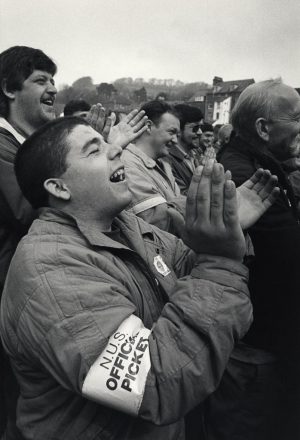 The first thing you first notice in Mik Critchlow’s Seafarers work are the different shapes of the men’s hands. They are found in all sorts of positions: clapping, shaped like steeples, outstretched to offer friendship, on hips, tentatively on jacket zips and, most revealingly, defiantly folded across chests. In one particular photograph the viewer gazes down across a sea of men with either their arms folded or their hands in fists, hidden in their jacket pockets. Each has distracted gaze that looks to the side of the camera, presumably beyond the picket line to the police out of shot. The image bristles with both rage and quiet determination.

Critchlow had spent many years as a seaman before leaving the industry in 1977. These pictures move across locations in England, underscoring the transient nature of life as a seafarer. While Critchlow was on site in December 1987, the Isle of Man Steam Packet Company tried to impose new working agreements. The resulting dispute spread as other operators and P&O Ferries in particular followed suit. Mik wrote in the original Side Gallery exhibition text:

“I did not go with the intention of photographing conflict or picket violence. On the rare occasions when this happened, it was wholly due to the volatile nature of the dispute and total lack of sensitivity on the part of the police force, working hand in hand with the company in a media war to sway public opinion away from the cause of the seamen”.

The photographs give us an insider view of the workers and their families in the middle of (what became) a 16 month strike. Yet some of the most powerful portraiture is of the men sitting on their own, looking away at other horizons beyond the viewer, a wider metaphor perhaps for what feels like their discomfort on land. One particularly powerful image is of Norman Craik who, the caption tells us, was ‘torpedoed twice during World War II…his experiences have left mental scars.’ The photograph reveals an old man in deep contemplation on the end of his bed, arms folded defensively. Critchlow’s camera gives him some space but nonetheless reveals much about his subject’s mood. Norman’s gaze looks away from the lens and in its absence we can’t help but read into the details we see in the background. There’s various paper ephemera and pictures of his family or friends sit underneath the mirror on the wall behind him. It gives a glimpse into a past life, before he was so deeply marked by the scar of war.

The Seafarer set captures everyday life on the water and at port. Much like Nick Hedges’ series ‘The Fishing Industry’ these images reveal much of the hard labour involved in this work. We see blurred shots of men dragging ropes and wielding hammers on rain-slicked decks. Yet there are moments of joy to be found here too. Down at the Bowson Smuggler’s Arms in South Shields we meet ‘Pancho’ captured in mid guffaw at a joke heard off camera. His hand is making a grab for his sides, less a gesture of defence and more in good humour. There is a torn up beer mat but no drink on the table in front of him. Whether he awaits another pint or is about to leave the pub, remains a mystery.

Critchlow’s images are spare but powerful not just because they capture a forgotten moment of resistance in Britain’s industrial history. There is an intimacy in them that reveals much about the men who seem caught between life on land and the danger at sea. In this instance, their hands tell us more about their inner worlds than captions ever could.