A collective & a collection 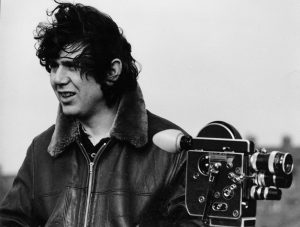 Amber came together in London in 1968 around the vision of founder member Murray Martin (1943 – 2007). Its first work was his student film, Maybe, a portrait of the Shields Ferry and its engineer. ‘Some people chose butterflies… I sought to reconnect myself with the working class culture and community which had nurtured me,’ he once wrote. He saw documentary as the act of a collector and he collected the people through whom he felt the vision could be articulated.

Integrate life and work and friendship.
Don’t tie yourself to institutions.
Live cheaply and you’ll remain free.
And, then, do whatever it is that gets you up in the morning.
Early Amber ‘Manifesto’ for an ideas factory. 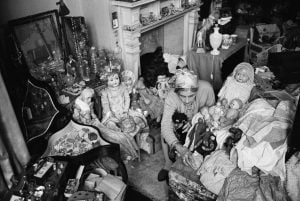 The Finnish photographer Sirkka-Liisa Konttinen, another of the founding members who came north in 1969, created a documentary portrait of Mai Finglass, the landlady, then in her late 70s, she and Murray shared in London. Mai was also the subject of another early Amber film, completed after the move north. ‘I think all the Amber men were in love with her,’ recalls Sirkka. Mai was an ‘eccentric collector’, particularly of dolls. Today, she would be described as a compulsive hoarder. It is hard not to see this film, at least in part, as a metaphor of the imagined collection. Sometimes, looking at how little has been thrown away by Amber over the years, the metaphor seems particularly apt.

Amber came together as filmmakers, but Sirkka-Liisa Konttinen’s photography opened up a complementary approach that was cheaper than film. To finance the group’s work, in the early days members took on a range of jobs in education and television. Sirkka even did a stint as a go-go dancer. They pooled income and paid themselves an egalitarian wage. 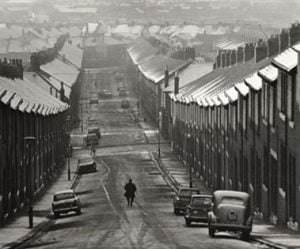 Sirkka fell in love with Byker, the Newcastle community of terrace streets into which she had moved on arriving in the North East. It was already scheduled for demolition, to make way for the Ralph Erskine-designed Byker Wall Estate, and this gave an urgency to the documentary portrait on which she embarked. Byker made a case for greater immersion in the lives and landscapes, helping shape the group’s work and influencing many of the projects it later commissioned and supported. But a wide ranging curiosity generated many photographic stories that went unprinted simply for the lack of funds.

1974’s River Project gave the first experience of what could be achieved through a wider group – Amber’s filmmakers and photographers, including new member Graham Smith; artists Laurie Wheatley and Peter Engel; writers Tom Pickard, Rodney Pybus and Tom Hadaway. Documenting and touring the industrial communities of the Tyne, River Project included the films Launch and High Row. The lack of a Newcastle venue for the tour made the argument for the group to open its own gallery and cinema.

The artist must prophesy not in the sense that he foretells things to come, but in the sense that he tells his audience, at risk of their displeasure, the secrets of their own hearts. His business as an artist is to speak out, to make a clean breast. But what he has to utter is not, as the individualistic theory of art would have us think, his own secrets. As spokesman of his community, the secrets he must utter are theirs. The reason why they need him is that no community altogether knows its own heart; and by failing in this knowledge a community deceives itself on the one subject concern­ing which ignorance means death.
RG Collingwood, Principles of Art, 1938
Quoted as the introduction to River Project, 1974 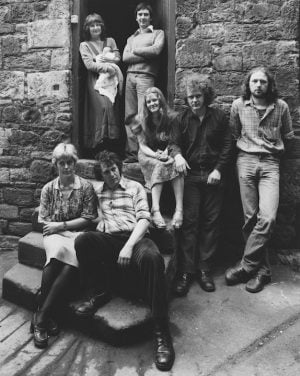 The Quayside, where Amber began renting workshop space in 1971, was a rundown part of Newcastle. Landlords were selling up. Threatened with eviction, the group bought both sides of the Battery Stairs alleyway in 1975 and opened Side Gallery two years later. The gallery generated a need for more production and, alongside Sirkka and Graham Smith, a number of photographers helped to shape the thinking: Ian Macdonald, Tish Murtha, Chris Killip, Markéta Luskačová, Izabela Jedrzejczyk and John Davies. Henri Cartier-Bresson celebrated his 70th with a Side retrospective, while Martine Franck worked on an early commission.

Having invested in the Quayside – and taking delight in its Victorian architecture – Amber turned its eye to the plans that would have replaced all the buildings east of the Tyne Bridge with office blocks. Sirkka and Graham Smith created an exhibition and Amber made the film, Quayside. Murray Martin and Newcastle Bookshop owner Brian Mills formed a clandestine Quayside Action Group of two. Working with a contact in the Department of the Environment they listed just about every building standing, including the wooden cafe on the corner of Broad Chare. It came down overnight in response.

Amber’s engagement with communities is rooted, in part, in a resentment of the way education had separated a number of collective members from their own working class backgrounds. Detailing the work that underpinned communities has always been important to the group. De-industrialisation accelerated with the election of Margaret Thatcher’s government in 1979 and opposition to it framed much of the work in the 1980s. With increases in funding for the gallery and for the filmmaking, it was also a time in which both the operation and the collection increased in scale.

Fishing, coal, steel and shipbuilding, together with unemployment, were all documented. Work focusing on the experiences of specific communities was toured extensively. Touring income enabled Amber to buy classic and contemporary international documentary, often rooted in the broader engagements of the Left. Through its engagement with individual communities and industries, it acquired historical North East work.

Murray Martin was a key figure in the negotiations between ACTT, Channel 4, the BFI and the Regional Arts Associations, which opened up broadcast access for independent regional, Black, Asian and women’s Film Workshops. A Channel 4 franchise in 1982 expanded Amber’s filmmaking, enabling a move into feature dramas such as Seacoal (1985).

A Current Affairs Unit was established. The build-up to the 1984 Miners’ Strike saw photographic projects by John Davies and Bruce Rae, alongside video ‘trigger tapes’, designed to encourage discussions in trade union and community groups. Through these, Amber piloted what became the Film Workshop Movement’s Miners’ Campaign Tapes. 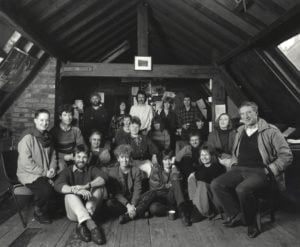 Wanting to root itself in a community again, in 1986 Amber committed to a 5 year residency in North Shields, buying a pub, The New Clarendon, as a social base and film location. It developed a former chapel as a studio and, for the making of the fishing film, In Fading Light (1989) it bought and ran the 63’ seine netter, Sally.

In 1989 Northern Arts cut Side Gallery’s annual funding from £120,000 to £25,000 and Channel 4 began to move away from its support for the Film Workshop Movement. In 1991 the North Shields residency was completed with photographer Steve Conlan’s Meadow Well: An English Estate, the Meadow Well-set feature film Dream On and The Writing in the Sand, which is constructed almost entirely from Sirkka’s photographs of North East beaches.

1987 saw an exchange between Amber and the East German film company DEFA. From Marks & Spencer to Marx and Engels documented the shipbuilding and fishing town of Rostock, while DEFA’s From Marx and Engels to Marks & Spencer documented shipbuilding and unemployment on Tyneside. Soviet liberalisation was opening new relationships between the West and the East and the following year Side Gallery began to explore links with Czechoslovakia’s Galerie 4. This led to a series of regionally-based International Photography Workshops in the UK, Czechoslovakia, France and Germany.

Amber had shifted its creative focus to County Durham after the North Shields residency. The group had been interested in establishing photographer activists in all five counties of the Northern Arts region, each both developing their own work and co-ordinating new production and community touring. Amber member Richard Grassick took on this role in Durham and organised the first of the International Photography Workshops at Crook in 1993. Over a dozen photographers spent a month documenting the experience of family from a base in the South West Durham town. The resulting group show Unclear Family delivered the theme and title for the subsequent workshops in Czechoslovakia, France and Germany. Many of the photographers involved brought exhibitions to the gallery and the collection.

The gallery had closed briefly in 1991 to adjust to its reduced funding and reopened as a single floor venue with a front of house provided by Newcastle Bookshop. Considerable energy went into Sideshows, a programme of touring exhibitions on Tyneside and in County Durham, Side Gallery operating as an integrated venue on the circuit. On low, standstill funding, however, by 1996 it had become impossible for Amber to sustain the scale of community touring and the exhibitions at Side began to draw more and more on the collection.

Eden Valley (1995) was the last film funded through the Channel 4 Workshop franchise and grew out the relationship with the harness racing community, which had continued strongly since the making of Seacoal. Now living in Durham and racing some horses jointly with Murray Martin and Amber, the Laidlaw family, who had been key to both Amber’s film and Chris Killip’s photographs in the mid 1980s, collaborated on the new film.

Easington Colliery closed in 1993, the last pit in the Durham Coalfield, and in 1995 Amber worked with young people in East Durham on a community video project, It’s the Pits. It began what would become an engagement with the coalfield and its post-industrial experience that extended for more than ten years.

A new production relationship with the BBC saw the development of The Scar, a feature film made with the women in Easington, who had been active during the Miners’ Strike. It became the first film in Amber’s Coalfield Trilogy.

Side Gallery just about survived the 1990s. By the end of the decade, however, an anti-documentary cultural agenda had, very tentatively, begun to be questioned. The shifts were glacial and still not entirely apparent when Amber decided to build a new wave of photography projects in County Durham, around the making of Like Father, the second film in the trilogy. New funding opportunities came with the National Lottery and this renewal grew into Coalfield Stories, 12 commissions developed between 1998 and 2006.

A second leap of faith, in 1999, saw Side Gallery’s exhibition programme revitalised. Building on the success of this, in 2002 the group took the opportunity to re-open the gallery on two floors. Some of the new photographers exhibited were drawn into the Coalfield Stories commissioning.

In 2004 Northern Rock Foundation, which had also supported the new photographic production, awarded a five year revenue grant to the filmmaking operation, enabling Amber to complete Shooting Magpies, the final Coalfield Trilogy film, which looked at the impact of heroin in East Durham. The making of this film drew extensively on Coalfield Stories. Amber was working on a new film about horsey culture and road racing in County Durham when Murray Martin died in 2007. <The Pursuit of Happiness became a film about a documentarist who had become part of the community he documented. 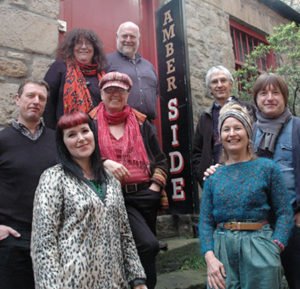 In 2003 Sirkka-Liisa Konttinen returned to the Byker Wall Estate, where an asylum seeker dispersal policy was radically changing the cultural make-up and her original photographs were being used to explain the community to its new residents. She began work on Byker Revisited, completed in 2009. Following her personal journey of return, Amber made the film Today I’m With You (2010).

The interconnected complex of narratives the group continues to produce and collect has always been recognised as a cultural responsibility. That sense of it only increases with time. In 2005 Amber began to reimagine its relationship to this ‘living archive’, placing it at the heart of the work. In 2010 the group initiated the process of redeveloping the gallery and the archive, access to the work and renewed engagement with the communities that have helped to produce it.