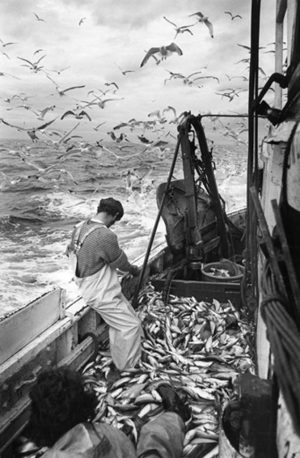 June is a busy month for AmberSide. There is a new gallery exhibition ‘Work’ curated by Dean Chapman which brings together images from our extensive, living archive on this theme. It opens on 22nd June and runs until September.

This year also marks the 50th anniversary of the Amber collective establishing themselves in the North East. To commemorate this milestone we have launched Amber’s new commissioning fund, which will support brand new work by both established and emerging documentary photographers and help grow the archive for the next five decades to come. Over the next few months we will be delving into parts of the AmberSide living archive, exploring some of the commissioned stories found there. This week it is reflections on the ‘Fishing Industry’ by Nick Hedges.

The ‘Fishing Industry’ was commissioned by Side Gallery in 1979, at the same time, Amber Films was working on Tom Hadaway’s The Filleting Machine, set on North Shield’s fish quay. Such was their commitment to the documentary cause, Amber bought a fishing boat to use in the filming of their next North Shield’s film In Fading Light, to give a real authentic dimension to the film.

The series of images by Nick Hedges explores all aspects of the industry from life lived at sea to the work done on land to get the fish to the shops. It is an industry consumers rarely get to see and few think of the work and danger that goes into their daily catch but some of that mystery is revealed here. We see strong and sturdy men in Fair Isle jumpers wading out to their boats, sailing into stormy skies, hauling nets, knee deep in their catch. The beauty of Hedges images are their stripped back simplicity but at the same time, what they reveal about this kind of work. One man leans casually on the inside of the boat with his back to the camera. Dozens of gulls menacingly hover above his head ready to swoop, holding position against the wind and the waves as he guts the fish and lets them fall to his feet. This is hard, isolated work. Later back on land, we see the fish neatly packed into boxes at the auction on the fish quay, men eyeing up the catches and smiling, jostling with one another.

It is not just the fisherman and their catch on show, we see other aspects of this industry too. A woman walks carefully across the factory floor with a steaming block of fish. A man stands legs astride in a smoke house, handling neat rows of kippers on sticks. Huge blocks of ice are handled with giant pincers in a large shed, glowing in the light they are almost treated as if they are hot, not cold. Tom Hadaway explained at the time that ‘fishing is the closest thing Britain can offer to the Gold Rush towns of the Wild West’ and we certainly see all the characters here that this example evokes.

Although the industry declined in the 1980s, North Shields is still a working port today, albeit with fewer boats landing at its shores. The fish quay also has become home to new restaurants and bars too, as a push to regenerate this area continues. Hedges’ images remain a timely reminder of the graft it takes to get your fish to your plate. It also speaks of how the sea and its contents are precious and need to be protected on a local and global level. A message even more pertinent 40 years on.

Become an AmberSide Patron to help fund our future archive (we promise not to buy another boat): https://www.amber-online.com/patrons-support/